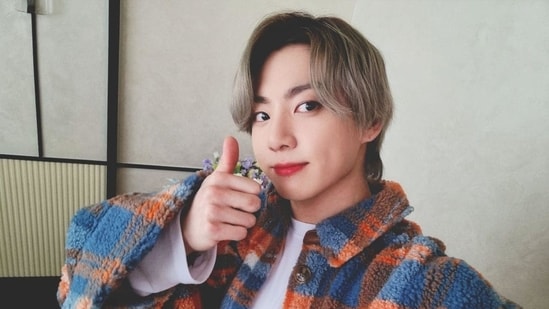 BTS singer Jungkook had once opened up about his ideal kiss. The singer had said that he wanted to recreate the passionate kiss from the Korean movie Love 911. Also Read : Will BTS have to enlist for mandatory military service next year? Here’s what the Korean govt says

BTS singer Jungkook had once opened up about his ideal kiss.

BTS members have often avoided questions about their love lives. The K-pop group, comprising of RM, Jin, Suga, J-Hope, Jimin, V and Jungkook, have dodged questions regarding their love lives effortlessly in the past few years. However, during their initial years in the industry, the members had spoken about their ideal partner types and gave a glimpse of their romantic side.

During an interview, Jungkook was asked if he had the opportunity, which romantic scene from a movie would he recreate. The singer gave fans a glimpse of his romantic side when he confessed he would want to recreate a scene from the Korean movie Love 911.

As reported by Koreaboo, and excerpts from Japanese magazine Haru Hana shared by veteran BTS fans on Twitter, Jungkook had said, “In a movie called ‘반창꼬(Love 911)’, there is a scene where the movie character lifts up his girl with both hands and kisses her. I want to experience that at least once before I die.”

Love 911 released in 2012. The movie starred Go Soo and Han Hyo-joo. The movie revolved around a firefighter and doctor’s romance. Han Hyo-joo was nominated for Best Actress nomination at the 49th Baeksang Arts Awards in 2013.

Meanwhile, Jungkook and his fellow BTS members are gearing for the release of a new track along with the Butter CD single. The song is set to release on July 9, which coincides with the day BTS announced their fandom’s name soon after their inception. Over the past few days, teasers have been release, featuring each member posing in a photo booth.

Will BTS have to enlist for mandatory military service next year? Here’s what the Korean govt says