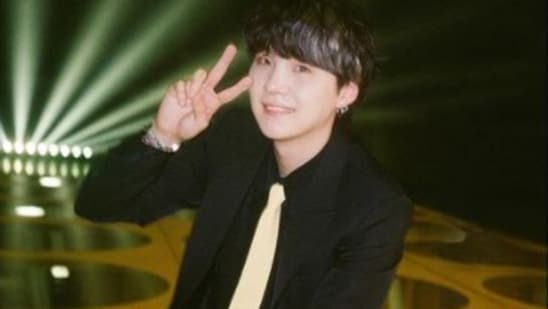 BTS: Suga once sent a text to an Indian man delivering his food in South Korea, here’s what it said

BTS has fans across the world for not only their music but also for their humble attitude. An Indian food delivery man working in South Korea has spoken about an incident.

SUGA is one of the members of the K-pop band BTS.MUSIC

BTS: Suga once sent a text to an Indian man delivering his food in South Korea, here’s what it said

BTS has garnered millions of fans across the world with their music and their humble attitude. Recently, an incident involving BTS member Suga was shared by an Indian food delivery man working in South Korea.

The boy group consists of seven members, RM, Jin, Suga, J-Hope, Jimin, V and Jungkook. The delivery man, a native of Kerala, revealed that he has crossed paths with RM, Jin, SUGA and Jungkook.

Speaking with Kerala radio channel Club FM, he said, “If you ask me whether I am a BTS Fan or ARMY? No I am not. So.. I’ve met 4 of them and that too as part of my job. The people I’ve met are Jungkook, RM, Jin, and SUGA. If you ask me about the experience all four of them are superb ..they never made us feel like they have any kind of attitude of having millions of fans.” A video of the interview was shared on Instagram by a BTS fan account.

He also narrated an incident on a rainy day when he was scheduled to deliver food to them. The man said that he received a message from Suga. He said, “I would especially like to mention one instance. Once, Suga… it was a rainy day.. Actually, there is no option for the customers (to contact us), but there is a feature called “Rider Request”. And in that request section, he wrote, “It’s a rainy day…It doesn’t matter how much ever late you come..drive carefully. Isn’t that a super quality to have? Right?” he added.

The boy band also has a huge fan following in India. Last year, they had expressed their hope to visit India once the pandemic ends. Recently, the members in an interview with a leading Indian news channel shared a special message for their fans.

In the teaser of the interview, the band members were seen greeting fans with the traditional ‘namaste’ and then said, “Indian BTS Army, aap humare dil mein rehte hai (Indian BTS Army, you live in our hearts).”

Earlier, they had also shared a message of hope for their fans as India fights the second Covid-19 wave. News agency PTI asked them if there was a message for the Indian ARMY and V in an email interaction said, “Our prayers are with India. Stay strong ARMY and let’s never lose hope.”