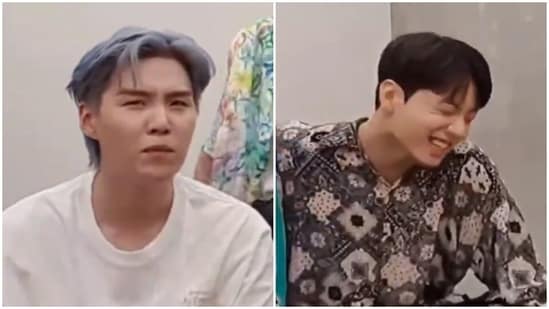 BTS’ Suga and Jungkook have reacted to the former receiving a marriage proposal from an ARMY. Watch.

BTS member Suga has received a marriage proposal from an ARMY. Suga has reacted with a confused look. However, the proposal has left Jungkook cracking up.

The V Live session of the K-pop boy band BTS on Tuesday had the seven members–Jin, Suga, RM, J-Hope, Jimin, V and Jungkook–talk about their upcoming song to pulling each other’s leg.

During the live, V aka Kim Taehyung was heard reading the message, “Yoongi marry me.” Suga who was drinking water, gave a bewildered expression though all the members burst out laughing. However, Jungkook was seen turning his face to his side and laughing uncontrollably.

Fans took to Twitter, posting video clips of the session. Sharing a clip, a fan wrote, “How many tyms u refuse these proposals??” Another dropped a clip and wrote, “jungkook’s cute smile at the comment “yoongi marry me” BTThe V Live session comes a few days after singer-songwriter Ed Sheeran has said that he has teamed up with BTS once again for the music group’s upcoming song. The English singer and the South Korean septet previously collaborated on Make It Right from the latter’s 2019 album Map of the Soul: Persona.S LIVE ,YOONGIS.”

In an interview with the American radio show Most Requested Live, Ed had last week said he is looking forward to their new track. “I’ve actually worked with BTS on their last record, and I’ve just written a song for their new record. And they’re like super, super cool guys as well,” the singer had said.

BTS has a CD version of their latest chart-topping English-language hit Butter coming up in July, and their label Hybe Corporation previously announced that it will include a brand new track that “will make your heart beat to the rhythm of BTS’s positive energy”. It is, however, uncertain if the group’s new song with Ed will be included in the CD version of Butter.